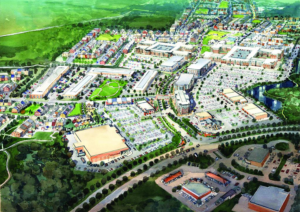 Development plans for Greenleigh at Crossroads have been aggressively in the works for more than three years by St. John Properties, the master developer that owns a majority of the land. The concept of the suburban development there has been on the drawing board for close to two decades.

It will spread over 200 acres when built out.

“Our goal is to emulate Maple Lawn,” said Richard Williamson, senior vice president with St. John Properties, comparing the project to the successful Howard County development that spans 500 acres in Fulton and has been a work in progress for the past 15 years.

The area was set to boom after Route 43 was extended by the State Highway Administration from I-95 east to Middle River in 2006, connecting Parkville to White Marsh and then the eastern rim of Baltimore County near Martin State Airport.

A Royal Farms opened off of Route 43 nearly three years ago, and Williamson said St. John is in negotiations with a large grocery chain to open a market nearby.

The first residential units at Greenleigh — The Arbors at Baltimore Crossroads — was completed three years ago by Somerset Construction and holds 365 units, Williamson said. The development today is managed by the Bozzuto Group and rents range from $1,280 to $2,260 per month.

The new construction to begin in March will kickoff the addition of town homes, condominiums, single family residences and more apartment units. St. John Properties is working with Elm Street Development and Somerset for those properties, Williamson said.

It will expand the population of the area to well over 53,000 within a five-mile radius, according to 2015 demographics.

Williamson said that Greenleigh at Crossroads is designed to have a town center space and hold public recreation and park space, walkable paths and even three lakes. It has been described by Baltimore County Executive Kevin Kamenetz as “new urbanism.”

“This is an exciting project that brings a fresh way of looking at mixed use development to Baltimore County,” Kamenetz said, in an e-mailed statement Friday.