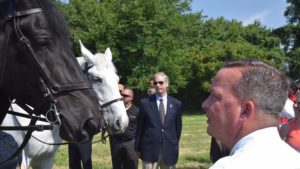 The Baltimore Police Department’s mounted unit, founded in 1888, consists of seven horses that are deployed for crowd control and to community events throughout the year. It now operates out of a former car dealership downtown.

The plans announced Monday — which Mayor Catherine Pugh said were “a very long time coming” — propose a state-of-the-art stables and educational facility to be constructed on the museum’s 40-acre historic property in West Baltimore, just off S. Stricker Street and a short ride from the museum on the old rail tracks it still operates.

Pugh, who visited the site along with Police Commissioner Kevin Davis and museum officials to announce the plans, said the proposed facility would include a railroad station stop for museum visitors riding the historic trains there, as well as classroom space.

She said city schoolchildren will be able to visit for free, and the facility would foster a better relationship between city youth and city police officers, which she said is “one of our major goals” as the city moves through a consent decree with the U.S. Department of Justice.

“That is one of our major goals: to increase opportunities for youth to interact with our police department,” she said.

She also said the facility would be “a very interesting and exciting tourist attraction” for visitors to the B&O museum from around the country. The museum claims about 200,000 visitors per year.

“We are creating another great cultural experience in our city,” Pugh said. “Our mounted unit is revered around the globe, and this new facility will continue to highlight their value and their storied history.”

Davis said bringing the mounted unit to West Baltimore will not only improve public safety, but will help form community relationships and be one of the “crown jewels” of the department’s ongoing efforts to reform since the unrest in 2015 and the subsequent Justice Department report finding unconstitutional policing.

Francis Smyth, chairman of the museum’s board, said the idea began during conversations about improving safety on the city’s west side a couple of years ago, and dovetails well with the museum’s desire to reinvent itself and provide a more interactive experience with the living city around it.

“We can no longer just be a repository for old stuff,” he said.

He said the museum is aiming to have the project completed within a year, and will begin the project using bank loans while it works to raise the funding needed.

Courtney Wilson, the museum’s executive director, said St. John Properties has committed to match up to $50,000 in donated funds from the community, and an anonymous donor has made a similar commitment of $50,000 in matching funds.

“We are very, very confident that the equestrian community of Maryland and in and around Baltimore will be enormously supportive of this project,” Wilson said.

The museum has formed a limited liability company to accept donations called First Mile Charitable Foundation, he said. The city will not be contributing funds, officials said.

Sgt. Russell Robar, supervisor of the mounted unit, said his team was excited for the upgrade.

“With the construction of this new facility, we will be able to continue to provide and grow community outreach for the years to come for all the citizens of Baltimore and the surrounding area,” he said.

He said having children come directly to the stables will provide opportunities to teach them about the horses in ways that aren’t possible when interacting with people on the street.

The mounted unit has been a source of funding concerns in the past, with community organizations stepping in to ensure the unit survived past budget cuts to the department. The Baltimore Community Foundation has helped fund the unit for years. Its most recent contribution of $5,000, in the first quarter of 2017, funded the purchase of a horse from Last Chance Ranch in Pennsylvania.

The unit has also been a source of trouble for the department in recent years.