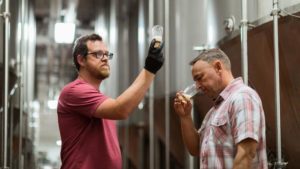 1623 Brewing Co.’s co-owners, and cousins, Zac Rissmiller, left, and Michael McKelvin plan to open a brewery in Carroll County next year. In the meantime, their beers are contract-brewed out of DuClaw Brewing Co. in Rosedale. (Courtesy of 1623 Brewing Co.)

A proposed amendment to allow breweries in Restricted Industrial zones would be a step in making Maryland more competitive with neighboring states in beer manufacturing and give Carroll County residents a chance to spend a day touring a brewery and potentially sampling its product at a local restaurant, said proponents at a public hearing.

Three individuals spoke at the public hearing Thursday during the Board of County Commissioners’ weekly meeting — the lawyer who proposed it, the property owner who requested it, and the prospective tenant. One commissioner said he is in favor of the amendment, but wanted to make sure the county is considering its own values rather than viewing it as a competition.

Kelly Shaffer, Shaffer and Shaffer LLP estate planning attorney; Thomas Pilon, St. John Properties senior vice president of development; and Mike McKelvin, co-founder of 1623 Brewing Co., respectively, discussed how 1623 would be the first to benefit from an amendment to the county code that would allow breweries in more than just heavy industrial areas, and said it would be a benefit for the county to participate in the booming industry.

“There are multiple municipalities who have adopted text amendments to allow breweries, distilleries, wineries,” Shaffer said. “I think this will make us more competitive as a county, within the municipalities and beyond.”

Shaffer said there are many layers of regulations — with federal, state and county licenses required before any zoning considerations.

Commissioner Ed Rothstein, R-District 5, said that is one of the reasons he supports the amendment.

“I do not believe we should be over-regulating,” he said.

“Currently the only zone for a brewery or microbrewery is the heavy industrial zone,” said Shaffer. “This [change] will open it up for the lighter industrial zone,” in accordance with the comprehensive rezoning of the commercial, industrial and employment campus districts the county is currently working on.

If the amendment is approved, the change will take place before the comprehensive rezoning is finalized, and 1623 Brewing Co. will be able to open at Liberty Exchange in Eldersburg.

Putting Maryland on the map

McKelvin, the owner of the brewery, has been a resident of Carroll County for 25 years and graduated from Western Maryland (now McDaniel) College, he said to commissioners Thursday morning.

He thanked them for considering the amendment, and said he wants to help build the popular industry in Maryland.

“In the state of Maryland, we are not even a billion dollar industry,” he said.

The largest brewery in the state is Flying Dog, a company that produces about 120,000 barrels a year, said McKelvin.

His plan as the first person to take advantage of the zoning change in Carroll is in his five-year business plan — which shows 1623 Brewing Co. producing about 5,000 cases per month, or 4,600 barrels per year, he said. That’s 4 percent of Flying Dog’s annual yield.

“We will barely be a blip on the radar in manufacturing,” he said, “but that puts us into the top 10 in Maryland, just to give you an idea of how far behind we are in this industry [here].”

Pilon came to the meeting representing St. John Properties and said the mix of uses is something he believes residents really want to see in Eldersburg.

“Carroll County people are looking for amenities that are not traditional manufacturing,” he said. “We’ve been able to bring some non-traditional businesses, like Basta Pasta, and also others that will hopefully be locating in the park.

“We feel like we are getting a good mix of uses there, the kind of business the county is looking to support,” he said.

“This area has treated us very well,” he said. “Our clientele base is very good. There are a lot of positives about Carroll County.”

Adding a brewery to Liberty Exchange would only make it better, he said.

“Having a brewery in the area would generate a lot of foot traffic for the shopping center and our area in general,” said Tripp. “I think it’s good for us and the community.

“And I’d love to get some kind of contract,” he said. “If we were to use a beer made 100 feet away from us, that would be the coolest thing in the world. We could have that on tap.”

McKelvin said 1623 Brewing Co., which is currently contracting out to brew at a Baltimore brewery, already has its beers in 90 percent of the county’s liquor stores and in all of the bars on Main Street in Westminster.

So visitors won’t need to go to the brewery in Eldersburg to drink it — they can go there for tours and a different kind of experience.

“We are hoping they’ll come want to learn a little about what we do [for] an hour, two hours at a time,” he told the Times. “Then hopefully [they’ll] go eat at Basta Pasta or somewhere else in Eldersburg, Carroll County, and make a day of it.

“That’s really been our focus the whole time.”

Rothstein, an ex-officio member of the Planning Commission, said he is in favor of the change but wants to make sure the county is measuring itself against its own values, not a competition with others.

“It’s not bringing more industry, more business, into the community to be keeping in pace with others,” he said. “I don’t want to be Howard County, Baltimore County, any other county.

The proposed amendment can be found on the Carroll County Government website at ccgovernment.carr.org/ccg/attorney/ordinance. The Board of Commissioners may make amendments to the proposed legislation based on the public hearing before making a decision at its March 28 meeting.