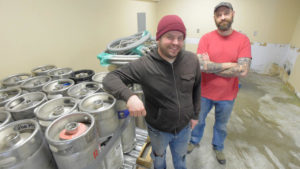 Brewery Fire is expecting to open its doors by June 1, but duo Dave Palmer and Jesse Johnson are releasing a collaboration Belgian-style tripel with Westminster’s Pub Dog Brewing Co. on March 28 to get their brews flowing.

The Board of Carroll County Commissioners has acted to allow breweries in more areas than were previously allowed.

“I think we’ve discussed this to the max,” Board President Stephen Wantz, R-District 1, said before the board voted to approve the change at its March 28 meeting.

There was a show of universal support at the amendment’s public hearing earlier this month, and the commissioners agreed that with brewery regulations at the federal, state, and county levels, adding more zoning regulations would be excessive.

“I do not believe we should be over-regulating,” Commissioner Ed Rothstein, R-District 5, said at the hearing on March 15.

The owners of 1623 Brewing Co. — Westminter resident Mike McKelvin and Elizabeth, Colorado, resident Zac Rissmiller — were present Thursday for the approval. The company is expected to be the first to utilize the zoning change by moving its operations into Liberty Exchange in Eldersburg.

Dave Palmer, co-owner of Brewery Fire, was also present at the meeting.

“As a member of the brewing industry, I just wanted to give my wholehearted support for this change,” Palmer told the board. “It will be a boom to the industry in Carroll and bring tourism dollars to our county.”

Brewery Fire is planning on opening its location in Taneytown on June 1.

“It is really exciting,” McKelvin told the Times after the amendment was approved. “It’s one of those things, as a business owner you work hard to get, you’re excited about, and then you realize the work just started.”

Now the duo has to deliver.

“We have this in our head, an arbitrary date, we’d love to be open for Labor Day weekend,” he said. “We now can finalize our lease with St. John [Properties] — all of that was pending this approval — and we can also now submit for all of our federal licensing, because you have to have a lease [to get the licenses].”

McKelvin also said he wanted to particularly thank Commissioner Dennis Frazier, R-District 3, who was a big supporter of the brewery throughout the process.

Rissmiller, who flew out from Colorado on Wednesday, said he is “stoked.”

“When it passed, I was sitting next to Dave [Palmer], just grabbed his elbow and shook him,” he told the Times after the meeting. “What an awesome, awesome day for Carroll County and for Maryland. So cool.

“It’s amazing here and we never want to change any of that. We just want to hopefully add to it, and just be a part of the community in as many ways as we possibly can.”