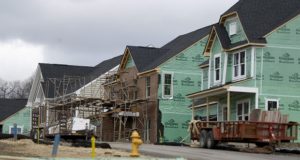 The company moved 95 employees to 181 Harry S. Truman Parkway in St. John Properties’ Annapolis Corporate Park. D.R. Horton has leased 14,600 square feet in a two-story, 64,000-square-foot Class A office building. There are currently two other Class A office buildings in the park totaling 125,000 square feet of space, and another is currently under construction and expected to be delivered early next year.

“Over the past three years, our homebuilding activity in this region has shifted to a greater prevalence in the Maryland suburbs,” explained Kevin McDonald, capital division chief financial officer for D.R. Horton said in a statement. “From a logistical and efficiency perspective, we made the decision to relocate our complete operations, encompassing administration, sales, marketing, purchasing and construction to an area within close proximity to our active communities throughout the metropolitan D.C. area.”

Maryland’s suburban housing market has been a strong performer in recent years with rapidly increasing prices, according to year-end reports on MLS data. A major driver for an increase in prices is a lack of supply on the market.

At the end of 2017, according to data provided by MarketStats by ShowingTime based on listing activity from Bright MLS, available inventory had dropped from 3.2 months worth to 2.9. Meanwhile, the median price for a home in 2017, driven by increases in suburban markets, jumped 3.6 percent to $259,000.

D.R. Horton’s move to Annapolis is also another gain for the suburban office market. In most metro areas in the nation office markets in the city have been outperforming their suburban competitors.

That trend is being driven primarily by employers trying to attract younger employees who prefer the live, work and play atmosphere provided by urban areas. But in the Baltimore metro area that trend has been reversed, with suburban office space outperforming the city, particularly in Baltimore’s traditional downtown.

According to a year-end 2017 report from Newmark Knight Frank, in aggregate the suburbs absorbed 1.4 million square feet more than the city last year. Rents in the suburbs also were $2 per square foot higher than in the city.

The report described the metro area’s office market performance during the fourth quarter as “remarkably strong.” But it also found a “noticeable performance gap” between suburban and city office properties.