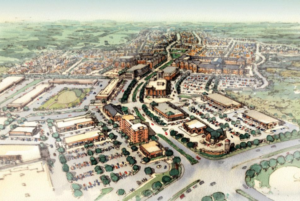 A rendering of the Baltimore Crossroads development in White Marsh where seven new tenants have inked deals for commercial space.

BALTIMORE, MD (September 26, 2017) — St. John Properties most recent tenant is showing that the firm’s “live, work and play” approach at the Greenleigh at Crossroads development in Baltimore County is capable of luring tenants from the city, which has traditionally had a leg up attracting businesses searching for that type of environment.

Eisai Inc. announced this week it had signed a 40,000-square-foot lease at the Greenleigh at Crossroads project in the White Marsh area. St. John Properties, Elm Street Development and Somerset Construction Co. broke ground on the $750 million project in 2016.

Eisai Inc., a pharmaceutical subsidiary of Tokyo-based Eisai Co. Ltd., will move roughly 55 employees from Baltimore to the research and development/ flex property at 11675 Crossroads Circle once construction at the site is finished in 2019. The company plans to use the building to manufacture and distribute the medicine Gliadel, which is used to treat brain cancer.

“This new Baltimore location enables Eisai a seamless transition in its efforts to continue to produce Gliadel for thousands of patients worldwide,” said Shaji Procida, president and chief operating officer of Eisai Inc.

In recent years more companies have been leaving suburban locations and returning to the city. Companies moving back to cities generally have been motivated by the desire to attract younger workers who prefer to live in the city and want to be closer to work. Cities generally offer more amenities, such as restaurants and bars, as well as the mass transportation millennials prefer.

In a bid to keep companies in the suburbs, developers and local governments have been emphasizing the need for live, work and play developments that mimic what cities provide. Communities such as Towson, Columbia and Bethesda have embraced mixed-use development in order to compete.

Crossroads at Greenleigh represents one of the more ambitious suburban developments breaking the mold of the traditional office suburban office park. In recent months the company has announced a plethora of new leases with companies, including Alliance Franchise Brands, Applied Technology Services and Paragon Consulting.

“This represents a tremendous win for Greenleigh at Crossroads given the influx of high-paying jobs destined to support our retail tenants and restaurants, as well as opening the possibility for the purchase or rental of residential properties within the community,” Richard Williamson, senior vice president of leasing and marketing for St. John Properties, said in a statement. “Attracting strong economic generators to Baltimore County was an extremely high priority in the design and planning of the community.”