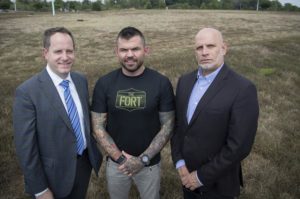 From left are Matt Holbrook, regional partner, St. John Properties, the parcel’s developer; Danny Farrar, president and co-founder of Platoon 22 and Michael Meyer, president and CEO of Goodwill of Monocacy Valley, stand on the land that will become home to a 40,000 square foot building that will house Goodwill’s headquarters and a Veterans Service center located on Monocacy Boulevard.

Work on a center to bring a variety of services to area veterans is set to begin Monday, with a groundbreaking ceremony to announce the start of the project’s construction.

The 20,000-square-foot veterans center is a collaboration between Goodwill Industries of Monocacy Valley and Platoon 22, a Frederick nonprofit that seeks to help veterans.

The center will provide counseling and help with workforce development and navigating veteran services, as well as hopefully educational and vocational classes, Susan Kenedy, a spokeswoman for Platoon 22, said Friday.

“We’re just trying to bridge the gap,” she said.

When the site of the project, in an extension of Riverside Tech Park off Monocacy Boulevard was announced in September, Platoon 22 founder Danny Farrar said he hoped that Frederick’s strategic location between Veterans Affairs facilities in Baltimore, Washington, D.C., and Martinsburg, West Virginia, means the center likely will attract veterans from all over the area.

A release Friday announcing the groundbreaking noted that more than 100,000 veterans live in Frederick and the surrounding area.

“The aim is to avert the all-too-frequent crises faced by many returning veterans such as chronic homelessness, incarceration, suicide and premature death,” the release said.

In September, Goodwill Industries of Monocacy Valley President and CEO Michael Meyer said his service in the Marine Corps made the project personal for him.

The groundbreaking is set to begin at 11:30 a.m. at Broadband Drive and Monocacy Boulevard in Frederick.

The center will fill part of a 40,000-square-foot building, and be part of a complex that will also house a Goodwill store and the company’s administrative offices.

The other two buildings in the complex will be an extension of Riverside Tech Park.

St. John Properties recently bought the 12.6 acres adjacent to the existing tech park, and the property will eventually hold more than 146,000 square feet of space.