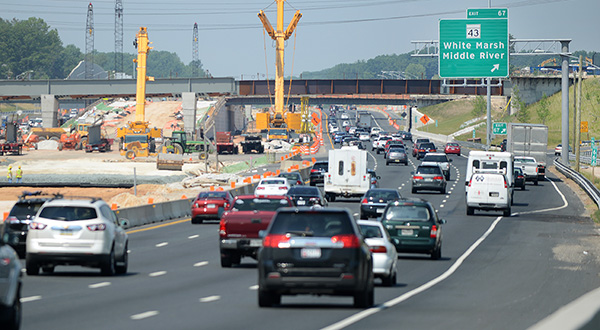 6-9-14 WHITE MARSH, MD- The express toll lane section of I-95 that runs from I-895 to MD 43, just northeast of Baltimore is in nearing completion. The Maryland Transportation Authority plans to have the project complete by the end of 2014 and give drivers the option of paying a fee to use the lanes to bypass heavy traffic. The rate of the fee will fluctuate around the peak traffic hours and size of the vehicle. (The Daily Record/Maximilian Franz)

The high density of federal agencies along the Interstate 95 corridor has helped convince a pair of firms to expand in the suburbs outside of Baltimore.

“Columbia Gateway increasingly is the go-to location for advanced technology and cybersecurity companies. Freedom Consulting already has a small presence with us elsewhere in the Fort Meade-(Baltimore and Washington) corridor market, and we are excited to accommodate their expansion into Columbia Gateway,” Paul R. Adkins, COPT’s executive vice president and chief operating officer, said in a statement.

L2 Defense provides logistics, engineering and training for biological, radiological and nuclear defense and emergency management to the U.S. military and to defense contractors, federal and state agencies.

Sam Lennon, the company’s president, said the firm conducts most of its business in the I-95 corridor from Aberdeen Proving Grounds to Northern Virginia, which made Greenleigh at Crossroads an attractive location.

“It was important to remain close to our former address in Edgewood to minimize disruption to our customers and employees in that area, but we can now recruit talent from as far south as Columbia, which can be reached in approximately 30 minutes,” Lennon said in a statement.

Private firms doing business in the defense industry represent a significant number of office users in suburban markets outside of Baltimore, particularly in Anne Arundel and Howard counties.

Those areas are near Fort Meade, home of the U.S. Cyber Command and the National Security Agency’s headquarters.

The Columbia office market, with 12.9 million square feet of inventory, produced a vacancy rate of 12.6% in the first quarter of the year with Class A asking rents of $26.63 per square foot, according to a report by commercial real estate services firm CBRE.

Overall the Baltimore market, with more than 68.5 million square feet of office space, has a 14.7% vacancy rate and Class A asking rents of $24.04 pert square foot.