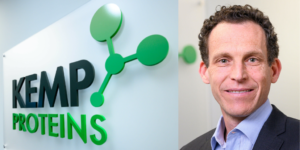 , headquartered in Frederick, Maryland is a gene-to-protein bioservices organization that works as an extension of its client’s labs to maximize productivity and reduce risk in their discovery, development, and manufacturing processes. The company has been in operation since 1992 and has documented protein expression processes for 1,000s of proteins in that time while solving some of their partners most challenging protein expression problems.

The company has been growing steadily in recent years and expanded its laboratory and personnel, so BioBuzz thought it a great time for a virtual “sit down” with Kemp Proteins’ Chief Executive Officer Michael Keefe and the company’s Chief Operating Officer David Hicks.

Kemp has been in business in different forms since the early 1990s. Tell our audience a bit about the company’s history.

Keefe: Chris Kemp, who the company is named after, started the company in 1992 after gaining a thorough understanding and knowledge of fermentation and cell culture in his 17 years at NIH and Biowhittaker. Chris used this experience to start Kemp Biotechnologies. At one time it became quite a large company of about 45 people in Frederick. The company was eventually acquired by a private equity group who failed to understand the business. About eight years ago, Chris committed himself to re-establishing the company under the Kempbio name. He rehired his core people and started offering protein expression services to clients in the pharma/ biotech industry. When my Six.02 Bioservices team purchased the company in 2019 there were six employees.

What made Kempbio an attractive acquisition for your company Six.02 Bioservices?

Hicks: One of the reasons we purchased the company was the real affinity Chris shared with his clients and it was obvious from discussions with these clients that they really appreciated the fantastic work of Chris and his team. We knew we were purchasing a company that had a good reputation within the industry and had over the years developed an extensive library of protocols on how to deliver gene-to-protein expression from early stage all the way up to large scale.

Chris successfully re-established the company with his core team and clients returned. We looked at the company and the core people and reasoned that with the right investment and infrastructure the company could eclipse its former glory. In some ways we feel like we are helping to write Chris Kemp’s autobiography. All of the great procedures he and his team had created for 1,000s of proteins have been documented over the last year…and we’ve placed them under an umbrella of quality.

What makes Kemp Proteins different from other companies in the bioservices space?

Keefe: A customer can come to us with a protein idea that might never have been expressed and Chris will choose the appropriate platform to deliver the client-specified protein. But at the end of the day, not every biological experiment is successful…This is something Chris and the team carry across well to the client. The expectations are established at the outset. We will attempt this and give it 100% and if unsuccessful, he will go back to the client and say this is what we learned and we think this is the way it will work. We don’t stop, we provide solutions and alternatives. We need to make sure we deliver something to the client at the end of the day. We’ll never pick up the phone and call a client and say “It didn’t work, see you…”

One of the different things we offer our clients so that we do not waste their time and money is a pilot expression during the early stage of the project and we look at this as an iterative process. In some cases, you order a bioservice and you get what you get. We sit down with our clients, collaborate and figure out how to express the protein of interest…We’re very honest with people. All scientists understand that this process isn’t always a straight path to the end of the project. They want additional options. We think, look at the data and provide thoughtful information back to our clients.

When we were looking at rebranding the company, we thought it was important to retain the name Kemp because it’s the touchstone for the company. Our tagline is the Protein Problem Solvers…we love straightforward projects but we’re different in that we enjoy solving really hard problems for our clients, and they are loyal to Kemp because of this.

Kemp Proteins recently expanded its facility and has been growing. What have you added to the facility and how many people have you hired during this growth phase?

Hicks: We’ve reinvested in our facility and are continuing to grow the team with talented and experienced people, while still maintaining a friendly environment. We started with six people and have grown this to a team of 22. We’ve also brought on a lot of modern and cutting-edge automation to improve our throughput and our range of services. The lab has been expanded from 3,000 to 12,000 square feet with assistance from St. John Properties who did an amazing job on our buildout. We designed our lab in a way that allows us to grow — it’s a very open concept type lab that can be reconfigured easily.

We’re doing what’s necessary to grow the company…we see a lot of services that can be introduced as part of Kemp Proteins that are a natural extension of protein expression. We’ve built out a new hybridoma facility that incorporates an AAALAC accredited animal facility. The equipment and personnel in this group also perform another new service for Kemp Proteins, that of stable cell line development. Our ISO 9001:2015 registration was in the final phase before the pandemic hit and we now have the capability to take early pilots and help our clients do the larger productions runs (grams scale) on items of the highest interest.

How has being located in Frederick, Maryland been beneficial to the company?

Frederick has a great pool of good scientists who do the terrible commute to the Rockville area. They don’t have to do this commute. There are some great companies right here in Frederick, one of which is Kemp Proteins. We are also seeking to bring scientists from Montgomery County. The commute to Frederick is against traffic and hence very easy. We are currently recruiting new scientists and have been very pleased with the applications we’ve received, both from the local area and from the surrounding geography, too.

There’s a nice core of organizations and companies and great scientists here and being in Frederick has been an advantage that we didn’t completely understand when we purchased Kemp.

How has the coronavirus pandemic impacted Kemp Protein operations?

Hicks: We have some positions open right now, but we are in an unusual moment in time. We’re trying to figure out what the new environment will be.

We had originally planned on hiring another 10 or so people this year, but this expansion is now on hold due to COVID-19. We’re waiting to see what the new reality will be. But we’re looking for great scientists so if the opportunity arises, we’ll find a way to hire them. There’s a lot of energy in our lab because we’re working on some truly exciting stuff. At the same time, some of our clients have shut their labs down completely. So, it’s a mixed bag.

We’ve put in COVID-19 protocols on how to do lab shift changes; we’re not having staff that perform the same function working side-by-side; we only allow three people in the lunchroom at a time; face masks are required and we stay six feet away from one another. Our cleaning service has basically quadrupled and we now have a full-time cleaning person. Anyone that’s not lab-related is working from home.

It’s just an unusual time. We had someone come onboard a few weeks ago. We always have a welcome lunch for new employees. We ordered takeout and people took shifts to meet the new person. Our new hire basically had a three hour long welcome lunch!

We now have five COVID-19 programs going on at our facility so we are considered essential. We know we are doing important work and there’s a lot of value in that and it’s very fulfilling to the scientists to know that what they’re experiencing — when they’re purifying a spike protein or doing nanoparticle purification for projects — could have an impact on a possible COVID-19 solution.

What’s your vision for the future of the Kemp Proteins?

Keefe: We have big aspirations.

We’re looking to be a major bioservices company for the country over the next many years. We’re trying to build something that will last and that people will turn to when they need bioservices and protein expression work done.