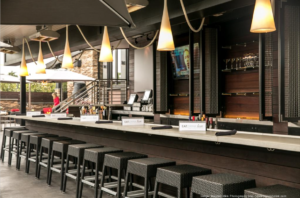 BALTIMORE, MD (September 19, 2017) — Michael’s Cafe, a hotspot in Timonium for more than three decades, is expanding.

The family-owned restaurant and sports bar just signed a deal to open a second location in White Marsh. The new Michael’s Cafe will take 6,024 square feet in the new Greenleigh at Crossroads, a 1,000-acre mixed-use development under construction by St. John Properties just off of Interstate 95 and Route 43.

The restaurant is expected to open next spring at 720 Concourse Circle. It will serve a scaled-back version of its expansive menu at the Timonium location, which includes seafood, steaks, soups and salads.

Michael’s Cafe opened 33 years ago at the corner of York and Timonium roads by Michael Dellis and his family. True to his Greek roots, Dellis’s menu has a Greek flair among traditional American dishes like crab cakes, filet mignon and a seafood club sandwich.

The 12,388-square-foot Timonium restaurant expanded three years ago to include an outdoor patio. The facility also has an indoor lounge and a conference room.

“For at least the past five years, we have been actively searching for the perfect expansion location that is far enough away from our York Road restaurant, while also offering consistently strong traffic counts to support our concept,” said Lauren McGee, one of the owners, in a statement. “We wanted our second location to be somewhat smaller than our current restaurant, because we believe this will be more manageable.”

St. John broke ground on Greenleigh at Crossroads nearly two years ago. The $750 million community is expected to attract 10,000 new jobs when it is built out. It was planned to resemble Maple Lawn in Howard County, a succssful mixed-use project that St. John is a partner developer in with Greenebaum and Rose Associates.