Michael’s Cafe has opened its second location in Middle River 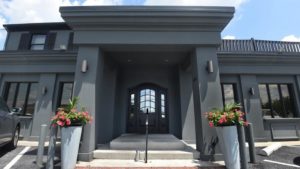 Michael’s Cafe has opened a second location in Middle River, in addition to its flagship restaurant in Timonium (pictured). (Algerina Perna/Baltimore Sun)

The popular Michael’s Cafe announced Tuesday that is has opened its long-awaited second restaurant in Middle River.

The new establishment is serving customers at Greenleigh at Crossroads near Interstate 95 and Route 43, according to a news release. Chef Josh Vecchiolla will preside over the 9,900-square-foot space, which is about three-quarters the size of the flagship restaurant in Timonium.

The menu will feature American classics such as steak, sandwiches and seafood, along with a few new dishes, including Vecchiolla’s signature scallops and grits. The indoor space includes a 40-foot bar and can seat 210 customers. A 900-square-foot outdoor dining area and lounge will be built later this spring, the release said.

The original cafe has been in business for about 35 years in Timonium at 2119 York Road. In 2013, the restaurant’s owners backed out of a plan to open a second dining establishment in Federal Hillafter it was opposed by neighbors who cited concerns about occupancy limits and parking.

“We have spent much time searching for the perfect geographic location to expand,” restaurant owner and operator Steve Dellis said in the release. “We are thrilled to be opening this second family-owned and operated restaurant in White Marsh-Middle River.”

A grand opening is scheduled for May.