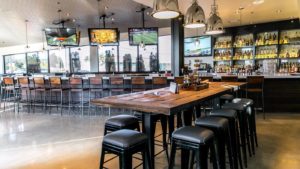 BALTIMORE, MD (September 19, 2017) — After searching for another location for several years, Timonium-based Michael’s Cafe will open a second restaurant in Middle River.

The restaurant is expected to open next year at 720 Concource Circle, part of the Greenleigh at Crossroads development near White Marsh, according to a press release.

Founded by Michael Dellis, Michael’s has been in business for more than 30 years in Timonium at 2119 York Road.

The new 6,000-square-foot location, about half the size of the original, will offer a scaled-back version of its current offerings in Timonium, where its menu includes American cuisine such as steaks, sandwiches and seafood.

Michael’s attempted to open a second location in Federal Hill four years ago, but the owners backed out of that plan after receiving pushback from the neighborhood.

The restaurant’s owners could not immediately be reached for comment Tuesday afternoon.