Mission BBQ nears the opening of its 100th restaurant 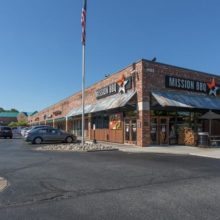 The Glen Burnie-based chain just inked a deal to open its latest restaurant in a 4,500-square-foot space in Frederick early next year. The move to the Westview Business Park sets Mission BBQ on a path to hit 100 stores in 2021 — the same year the chain celebrates a decade in business.

Mission opened its first barbecue restaurant in Glen Burnie on Sept. 11, 2011. Its restaurants are corporately held and not franchised.

The fast-casual chain serves pulled pork, smoked turkey, brisket and ribs with sides like collard greens and macaroni and cheese and was listed among the largest restaurant groups in Greater Baltimore in June by the Baltimore Business Journal. Nationally the company has locations in 16 states spanning north from Wisconsin and Connecticut, down to Tennessee and Florida.

Mission currently has 15 restaurant sites in Maryland and is planning to open its 99th store in Towson at 740 York Rd. on Nov. 16. Baltimore-area locations include Perry Hall, Canton, Columbia and Owings Mills.

“Over the past 10 years, Frederick has been one of our most asked-for communities and we cannot open fast enough,” said Bill Kraus, who co-founded Mission BBQ with Steve Newton. “This site emerged as the clear-cut winner after an extended search. Our opening is also timed closely with the beginning of the annual barbeque season.”

Other tenants in the 49-acre suburban business park located off Interstate 270 include Texas Roadhouse and Chili’s.

Last May, the business websites Debtwire and Mergermarket reported Mission BBQ officials were exploring a sale of the company in a bid for buyers. At the time, the chain was valued at $30 million.