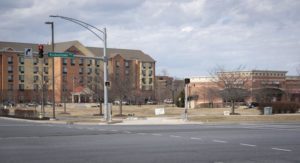 The Frederick County planning commission has approved construction of a Wendy’s site at intersection of Md. 85 and Executive Way.
Photo by Bill Green

The combination of an ongoing development project and one that’s just getting started should bring plenty of new additions to an area along Buckeystown Pike in the next few years.

The Westview South development will be adding a new Wendy’s to its mix of eateries, shops and hotels. Meanwhile, a new industrial park to the south will be adding several buildings and redesigned roads to the rapidly growing area.

Those changes are combined with a new hotel coming to a location on the other side of Md. 85.

The new Wendy’s will be built on a 45,000-square-foot plot of land in the Westview South development, at Md. 85 and Executive Way.

The site was originally intended for a bank, but the restaurant use is approved as part of the overall mix for the shopping center, Denis Superczynski, a principal planner for the county, told the Planning Commission.

The store will have a sleeker, more modern design than traditional Wendy’s outlets, with more muted colors and other design changes.

It will incorporate a red panel slab as part of a way to incorporate both an architectural feature and a branding element without having a large, free-standing sign, according to a county staff report.

Fast-food architecture is moving toward more natural colors and materials and away from a more garish style, Superczynski said.

In January, the Planning Commission approved plans to change the makeup of the residential section of Westview South, reducing the number of single-family houses and eliminating some condominiums and apartment buildings, and adding town houses.

In January, the Planning Commission approved a 114-room Hilton Tru hotel in the Omega Center industrial subdivision across Md. 85 from the Westview development.

The Planning Commission ultimately unanimously approved the project, along with a preliminary plan and two site plans involved with the Arcadia Business Park, south of the Westview South development off Md. 85.

It would also extend the current dead-end Conestoga Trail to more than 2,000 feet as a private road to be renamed Arcadia Drive.

The road would provide all the lots in the park with access to both Md. 85 and Wedgewood Boulevard.

Two lots on the property are already under construction, with three buildings between them, said Matt Holbrook of St. John Properties, which is developing the property.

The two lots whose site plans were approved Wednesday will be the next phase of the project, Holbrook said.

The buildings could fit a variety of uses, from office to small warehouse space, especially life science or e-commerce businesses, Holbrook said.

Commissioner Sam Tressler asked if there is a demand for that much office space in that part of the county.

“The overall market in Frederick has been a challenge” for this type of project, with office and flex warehouse space, Holbrook said.

Timing for the construction on the two newly-approved lots will be determined by the market, he said.

Holbrook said it’s too early to know what will go into the new buildings.

“Obviously, we’re opportunistic and welcome all folks interested in the space,” he said.