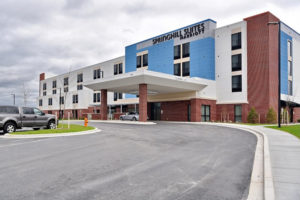 Marriott Springhill Suites has opened at Greenleigh at Crossroads, a 1,000-acre mixed-used development in White Marsh.

“Baltimore Crossroads has grown exponentially over the last several years and the recent real estate elements introduced to Greenleigh at Crossroads are perfectly suited to support the long-term needs of a hotel,” said Tom Lee, president of USA Management II and a partner with Middle River Hotel Partners.

Black & Decker said earlier this year it signed a lease for one of the buildings and plans to move 400 jobs to the property.