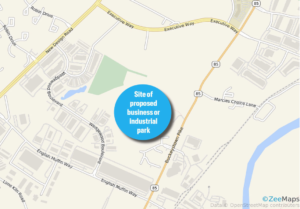 Baltimore (December 21, 2106) — The owners of a property off Md. 85 can develop it into a business or industrial park after getting approval Wednesday from the Frederick County Planning Commission.

The commission unanimously approved the proposal to divide the 61-acre property into six lots, allowing the creation of an industrial park on the property off Md. 85.

The Countryside community sits southeast of the property, along Md. 85.

Part of the project would include extending the currently dead-end Conestoga Trail in the Countryside community to meet with a planned street, which will travel 1,600 feet through the industrial park. That road could also include a connection with Wedgewood Boulevard west of the properties.

The extension would also involve putting a traffic light at Md. 85 and Conestoga Trail.

A 17-acre lot, on which the Planning Commission approved plans to build a 112,000-square-foot building, also contains a barn and corn crib that are part of the Arcadia Mansion Farm that sits next to the property.

Several commissioners asked what the developers’ intentions were for the structures.

Matthew Holbrook, of St. John’s Properties, said there’s some confusion with the Maryland Historic Trust about their historic significance.

The project has evolved considerably over the years.

The 2000/2001 Adamstown Comprehensive Rezoning process made the property limited industrial. In 2006, the Planning Commission approved an application for six industrial lots that would hold 11 buildings containing more than 413,000 square feet of warehouse or office space on 104 acres.