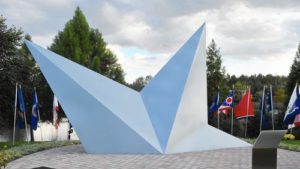 (MATT BUTTON | AEGIS STAFF / Baltimore Sun)
Located at The Gate at Aberdeen Proving Ground, the “Fallen Star” memorial dedicated to Major General Harry Greene, who was killed in Afghanistan, will soon be joined by a new sculpture dedicated to Gold Star Mother and Families.

Baltimore (October 25, 2016) — A statue honoring Gold Star Families and Gold Star Mothers, whose children were killed in service during United States wars, is the latest addition to a section of an Aberdeen Proving Ground office park that is dedicated to fallen U.S. troops and their families.

The marble composite statue, which has a bronze outer covering made to resemble a bronze statue, depicts a woman holding a photograph and her child’s dog tags. The statue has been placed on a bench in a park along the edge of a pond near the entrance to The GATE, or Government and Technology Enterprise, business park for military contractors that support the various commands at APG.

The life-size sculpture, which is scheduled to be unveiled during a dedication ceremony Tuesday morning, depicts the woman looking up toward the Fallen Star memorial honoring Maj. Gen. Harold J. Greene, as well as all other U.S. troops who have given their lives during wartime.

Maj. Gen. Greene, the first U.S. general to be killed in a war zone since the Vietnam War, died in Afghanistan in August of 2014. He had previously been assigned to Aberdeen Proving Ground.

The Fallen Star memorial, which was dedicated in October of 2015, is a 20-foot stainless steel piece, surrounded by flags of various U.S. states.

The developer of the 416-acre GATE, Baltimore-based St. John Properties Inc., commissioned artist Will Hemsley and his father, Tilghman Hemsley, to create both memorial sculptures.

The business park is a short drive from the APG visitors’ gate and was developed on federal property under an arrangement with the Army called an enhanced use lease. It is the only such private development located within the military installation’s security perimeter.

Sharon Akers, vice president of corporate relations for St. John Properties, gave a reporter and a photographer from The Aegis an advance view of the Gold Star memorial Monday, although the sculpture remained under wraps until Tuesday’s ceremony.

The sculpture of the woman is designed so she is “reflecting up at” the Fallen Star memorial, according to Akers, who did show a photo of the sculpture.

Several hundred people, including members of the Gold Star Mothers and Gold Star Families organizations, will be at The GATE for the dedication.

“We wanted to make sure the Gold Star Mothers were the first ones to see it,” Akers said.

Janice Chance, president and chaplain for the Maryland chapter of Gold Star Mothers, will be a guest speaker, according to Akers.

Current and retired members of the military are expected to attend, as well as elected officials, such as Maryland Congressman C.A. “Dutch” Ruppersberger, and U.S. Rep. John Larson, of Connecticut, who is considering something similar for his state.

Akers said organizers want current members of the military to “understand that people are making sure that, if anything happens, they’ll be remembered.”

She noted St. John Properties has paid for both memorials out of company funds.

St. John officials, with the blessing of founder and Chairman Edward St. John, developed the Falling Star memorial to honor Maj. Gen. Greene and his connection to APG.

“He was so well loved,” Akers said.

He had been the deputy commanding general of the Army’s RDECOM, or Research, Development and Engineering Command and the Program Executive Officer for Intelligence, Electronic Warfare & Sensors (PEO IEW&S) at APG, according to a St. John news release.

The 55-year-old general, who was a 34-year veteran of the Army, was shot and killed by an Afghan military policeman as he was leading a group of international and Afghan military dignitaries through a national defense university in the capital, Kabul.

Twelve other troops were wounded – the attacker was killed by return fire.

His widow, retired Army Col. Susan Myers, is scheduled to attend the dedication of the Gold Star memorial, Akers said.

“We all felt there was that human element that was missing,” she said.

Will Hemsley, the co-creator of the memorials and a resident of Centreville on the Eastern Shore, said he looked through about 300 head shots before he found the ideal model for the Gold Star statue.

Hemsley said the woman posed for 3-D photographs used to create a computer model which he then used to get measurements for the sculpture.

His ancestor, Tench Tilghman, was Gen. George Washington’s aide-de-camp during the American Revolution.

Hemsley said he and his father wanted to show, through the memorials, “not only an appreciation for the military but the sacrifice various individuals have incurred on behalf of the [American] republic.”

The GATE hosts major defense contractors, such as Raytheon, in 650,000 square feet spread over 12 buildings. It has the capacity for 3 million square feet.

Akers said the enhanced use lease arrangement with the Army creates an income stream for the installation.

“Through various rents that we get from the tenants, that money is basically used for non-budgeted items for APG,” she said.

The Army Times contributed to this report.