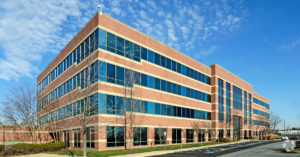 In a year marked by Covid-19 and widespread remote work, St. John Properties has acquired its second office property in the Baltimore-Washington corridor.

The private Woodlawn-based developer just bought the Class A office development at 14400 Sweitzer Lane in Laurel for an undisclosed price, officials said Wednesday.

The seller was listed as Riggs & Company Trustee based in Texas, state records show. It acquired the development in 1998 for $1.37 million.

The push into the Prince George’s County market is part of a strategy to boost leasing efforts for government contractors and other agencies that have been resilient during the pandemic. Another Maryland-based developer, Corporate Office Properties Trust (NYSE: OFC), has also focused on the public and private market that caters to military and cybersecurity-related companies.

“Leasing activity among professional services firms, government contractors and related companies has accelerated in the second half of this year in the Baltimore-Washington common market,” said Sean Doordan, a senior vice president for St. John.

The four-story building sits on seven acres and is half leased, a spokesperson for St. John said. It stretches 120,904 square feet and is located just off Interstate 95 near Fort Meade, the NSA-Goddard Space Flight Center and offices for the federal Food and Drug Administration.

St. John is planning to add $500,000 in upgrades to the development, including a fitness center and spiffed up common areas and landscaping. Doordan said the developer is also offering signage on the building’s facade to potential tenants. The office building has a two-story lobby, an outdoor patio and a 400-vehicle flat-surface parking lot.

“Our team is extremely familiar with the Prince George’s County commercial real estate market based on our development activities and long-term leasing accomplishments at Melford Town Center and other projects,” Doordan continued. “We believe companies will increasingly choose strategically-located suburban office space to take advantage of its lower density and more functional floorplates.”

This acquisition was St. John’s second office deal in Maryland this year.