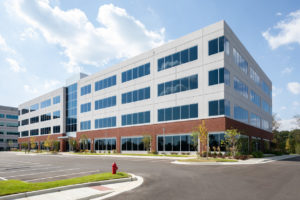 The lease is at 1500 W. Nursery Road, a four-story Class A office building in the BWI Tech Park. St. John delivered the building on a speculative basis, without a tenant signed to a lease, last fall.

“Our portfolio-wide philosophy of developing speculative commercial office product enabled us to immediately respond, and provide a timely solution to, this large requirement,” Sean Doordan, senior vice president of Leasing and Acquisitions for St. John, said in a statement. “Retailers and area businesses contained within the BWI submarket, as well as the regional economy, will be the beneficiary of the high-paying, technical jobs housed in this building.”

The company, which asked St. John not to be identified, plans to start relocating to 1500 W. Nursery Road in July. It’s projected the office building can provide work space for as many as 700 employees. Bill Jautze, of St. John Properties, represented the landlord in the deal.

The office submarket around BWI continued as one of the strongest performing regions in the Baltimore metro area through the end of 2019, according to a fourth-quarter market report by commercial real estate services firm Newmark Knight Frank.

In terms of year-to-date absorption, or the total amount of new office space leased by tenants, the BWI submarket absorbed 67,081 square feet of space, which was only topped by Columbia, which leased 143,185 square feet of office space.

Top-flight offices in the BWI area also had the second-highest asking rent on average in the Baltimore metro. The asking price for office space near BWI reached $30.38 per square foot in the fourth quarter of 2019. The Annapolis submarket was the only area with a higher average Class A asking rent, which at year end was $33.22 per square foot.

Much of the demand for office space along the Interstate 95 corridor between Baltimore and Washington is driven by government contractors, particularly in the cybersecurity field. Firms looking to be close to U.S. Cyber Command, which started operating at Fort Meade in 2011, and the nearby National Security Agency headquarters have flocked to the area.

St. John is also positioned to benefit from the demand for office space in the Interstate 95 corridor. The firm lists 28 properties in the Baltimore and Washington areas, including the Maple Lawn Corporate Center, the I-97 Business Park, and the 156-acre BWI Tech Park.