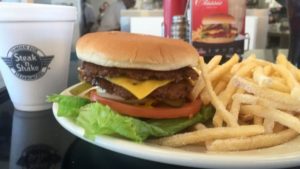 An example of the types of burgers the new Steak ‘n Shake in Baltimore County will serve. (Chase Cook / Capital Gazette)

The burger spot is scheduled to open this summer in Greenleigh at Crossroads, a mixed-use development in White Marsh that includes a Dunkin’ Donuts, Crossroads Wine and Spirits and Subway.

This will mark the first Baltimore County location for the chain, which was founded in Illinois in the 1930s. It is known for its “steakburgers” and milkshakes made from hand-dipped ice cream.

Bill Holzman, who represents the landlord St. John Properties, said the new fast-food spot should be a popular lunch choice for area office workers as well as an option for a late night bite.