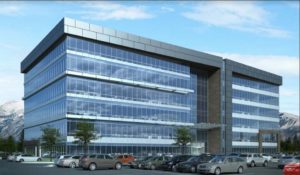 Rendering of Beltway West, a new 20-acre business park that officials announced Thursday will be built in Taylorsville by Baltimore-developer St. John Properties, with another park also planned in Springville.

The plans, made public as Utah continues to ease health restrictions related to COVID-19, could mean as much as a $120 million investment in the state’s economy and create new spaces for up to 2,750 workers, the Baltimore-based company said.

Utah Gov. Gary Herbert, who participated in an online news conference Thursday, called the St. John’s move a sign that investors were reassured by Utah’s approach to the pandemic and to business regulation.

“What Utah has done well if not better than any state in America and most places around the world is instill confidence,” the Republican governor said.

Herbert said that in the last week, seven companies had agreed to expand their operations in Utah in the midst of the pandemic, with the prospect of creating as many as 3,665 jobs in the coming years. Among them are three companies enticed to grow their operations by the promise of future state tax refunds.

Daniel Thomas, regional partner for St. John Properties in Utah, said in spite of challenges from the pandemic, the firm sees “a tremendously bright future in Utah.”

The company’s announcement Thursday included a Forbes Magazine reference to a recent study by business analysts at Moody’s Analytics, which found the wider metropolitan areas around Salt Lake City and Provo among the best-positioned in the U.S. to recover from the health crisis.

Val Hale, executive director of the Utah Governor’s Office of Economic Development, said that word of St. John Properties’ plans, sent an important psychological signal that the state is rebounding.

“This is a testament that things are happening in Utah,” Hale said.

The St. John Properties project in Taylorsville, to be located near the intersection of I-215 and 2700 West, will cost $80 million, be called Beltway West and will spread five buildings — one of them at six stories — over a 19.5-acre site, for a total of 300,000 square feet of new offices, company officials said.