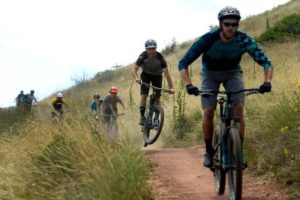 Cyclists from Yeti Cycles enjoy their lunch hour daily ride on trails at Apex Park in Jefferson county on Aug. 6, 2015.

Yeti Cycles is all about building top-flight bikes that move smoothly over rough terrain, but the company announced this week that it will be staying stationary in Golden while it continues to grow.

Yeti has signed a lease for all of the 28,560 square feet of space contained inside the building at 611 Corporate Circle, according to a news release issued Monday. That’s next door to Yeti’s existing headquarters in Golden at 621 Corporate Circle.

The new deal increases the high-end bikemaker’s footprint in the Corporate Center business park, located near the Sixth Avenue-West Colfax Avenue intersection, to almost 60,000 feet. Yeti has plans to grow its presence on the property even more in early 2021, according to Monday’s press release, distributed by the company’s landlord, St. John Properties.

“We are excited to have our long-term facility plan fully baked and continue our partnership with St. John Properties to meet our ever-expanding space needs,” Bill Mueller, Yeti’s chief financial officer, said in a statement. “The central Golden location, with access to five major trailheads all within riding distance to the office, is one of the most valuable aspects of the facility.”

The announcement represents a coup of sorts for the city of Golden. A year and a half ago, commercial real estate news site Mile High CRE reported that Yeti planned to partner with Fort Collins real estate firm Neenan Archistruction on a commercial park catering to outdoor-focused brands. That campus would have been outside Golden in unincorporated Jefferson County, according to Mile High CRE.

Now it’s clear Yeti is staying put in the city it has called home since 1999.

Glueck said he and other city officials have been working with Yeti for years on ways to accommodate its space needs. He is pleased the company has found a solution that will allow it to focus entirely on making high-quality bikes.

Golden is well aware of the company’s emphasis on getting employees out of the office and onto trails in the area. The Yeti office shuts down from 11:30 a.m. to 1 p.m. daily to accommodate an all-staff “lunch ride.” Glueck said the city plans to launch design work in 2020 on bike-centric improvements along West Colfax. It’s an estimated $7 million project with federal funding backing it that should make it easier for Yeti staffers to make it to trailheads.

Hosting the headquarters for companies like Icelantic Skis and Adidas Outdoor, Golden has cemented itself as a hub for the outdoor recreation industry.

“Outdoor recreation is a huge part of our economy, our economic development efforts and our culture here in Golden,” Glueck said.

But he points out the city is hardly alone in that in JeffCo. Just last year, Hestra USA, the domestic division of the Swedish glove-making company, opened a new facility in Arvada. Its digs prior to that were located on Corporate Circle in Golden, according to BusinessDen.

“The decision by Yeti Cycles to retain their presence within Corporate Center demonstrates the attractiveness of the business environment and its strategic placement near amenities and major highways,” St. John Properties’ regional partner, Brandon Jenkins, said in Monday’s news release.