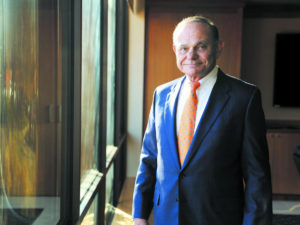 Ed St. John has a succinct way of summing up his many decades in real estate development.

If that’s the case, the patriarch of St. John Properties has built a life-size game board of 20 million square feet of office, retail, warehouse, flex and residential properties in eight states worth more than $3 billion.

He is both stoic and quick witted, arriving regularly at the office in a Chevy Suburban with a gym bag at the ready for his daily workout. At 81, St. John is regarded by his peers as a visionary and teacher whose role as a major philanthropist has cemented his legacy.

The Edward St. John Foundation has awarded more than $60 million to educational programs and nonprofits over the years. He says he learned the importance of giving back while a teenager at Mount St. Joseph High School in Baltimore.

His foundation’s gifts to date include grants to formal educational programs like a cyber security program at Loyola Blakefield and a $10 million gift to his alma mater the University of Maryland for the Edward St. John Teaching and Learning Center that opened in 2017 in College Park.

That award helped to spark St. John’s Woodlawn-based company to national recognition in the fall when it was awarded the prestigious national “Developer of the Year” award by NAIOP.

From Middle River to Salt Lake City, more expansion is in the works. St. John has made that a priority.

“We want to grow in every business-friendly state there is,” he said, citing Forbes Magazine as the guide to that roadmap. “The No. 1 state is Utah — and we have somebody out there now.”

That office opened in 2014 in Pleasant Grove, Utah, and is developing 600,000 square feet of office and retail near Salt Lake City. There are other St. John Properties developments in Virginia, Wisconsin, Baton Rouge, Louisiana, Reno, Nevada, and Golden, Colorado, to name a few.

The company’s local footprint includes a partnership in Maple Lawn in Fulton and the ever-growing, 1,000-acre mixed-use Greenleigh at Crossroads in Middle River. It also has dozens of warehouse, office and single-story flex buildings in the suburbs bearing the black and gold SJP logo. Most are located along main arteries like Interstates 95 and 695 and near Baltimore/Washington International Thurgood Marshall Airport.

St. John is regarded among the last of a generation of Maryland developers who helped to reshape the state’s commercial and residential landscape beginning in the 1960s. They became colleagues and friends and learned their business from the inside out — mostly from each other.

“Leroy taught me to build and I taught him what to build. It was that simple,” St. John said of an early partnership with the late Leroy Merritt, founder of Merritt Properties.

The two started out in 1966 developing a single-story cinderblock office space in Baltimore, and St. John has the original deed framed on his office lobby wall.

Robb Merritt, president of Merritt Properties and Leroy’s son, said he first met St. John as a toddler and watched his father and St. John grow professionally. The two stayed close for decades after they set up separate companies in 1971, often checking in on each other’s progress.

“When Dad passed away, Ed was in Aspen and he flew back to say goodbye,” Merritt said. “He was on the ski slopes and he came right back to Maryland. It was touching. They had a much deeper relationship than I ever knew.”

St. John also had a decades-long development partnership with the late Stewart Greenebaum, founder of Greenebaum Enterprises and developer of Maple Lawn. The two for years collaborated on flex space and commercial space in the region before the Howard County legacy project.

“What impresses me most about Ed St. John is you can’t learn what he does even in the best business schools or master’s programs,” said Michael Greenebaum, president of Greenebaum Enterprises. “He takes care of his employees and he gives back to the community. He is really good with life lessons.”

St. John said his company’s future depends on recruitment and training of the next generation of developers. The company actively recruits dozens of business and real estate majors into entry-level jobs to learn the ropes in a four-year apprenticeship program.

The future likely will include a move to convert some surface parking lots in his developments to new buildings as driverless cars and artificial intelligence enter the mainstream and impact the workplace.

“We are on the cusp of the greatest technological boom the world has ever seen,” St. John said. “We’re on the fifth generation of application of computers and soon, things are going to talk to things like your refrigerator is going to talk to your oven and it’s going to be the internet of things.”

Looking forward is part of St. John’s restless nature — and his success.

It was one of the reasons the company was recognized by NAIOP, the commercial real estate nonprofit group, whose website lauds the company’s vision of “developing with a long view.”

To that, St. John credits his 190 employees.

“I never in a million years thought our little company was ever going to get that award,” he said. “But it was the result of the people who work here. I’m the leader, but one of the things we do is hire the brightest and smartest in the field and we train everybody well.”