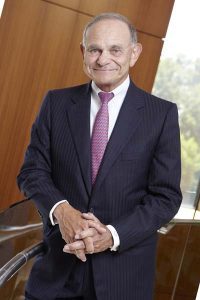 When Edward St. John inherited the family business, he converted what was once a mix of manufacturing, distribution and real estate into one of the largest privately-owned real estate companies in the Mid-Atlantic region. Since 1971, St. John has applied a simple business philosophy that has bred long-term success: a commitment to service makes a difference.

In keeping with his commitment to give back to the community, St. John founded the Edward St. John foundation with the intent to provide financial assistance to formal education programs through the high school level. The organization was founded in 1998 and has benefitted more than 350 organizations. More than $60 million has been contributed, pledged and gifted through donations by the Foundation, St. John Properties and Edward St. John to a variety of not-for-profit organizations in communities where St. John Properties has a business presence.

“Education is what changes people,” St. John said in a recent interview with The Baltimore Sun. “What makes the difference between the man who makes minimum wage and the man who makes $100,000? It’s education.”

St. John donated $10 million to his alma mater, the University of Maryland, to support the construction of the Edward St. John Teaching and Learning Center. The new 187,000 square foot building — hailed as a national model for collaborative learning — opened in 2017, includes 12 classrooms and nine teaching labs, and will serve as a collaborative learning space on the College Park campus.

In 2018, he was inducted into The Daily Record’s “Influential Marylanders Circle of Influence.”

What is the best piece of advice you ever received and from whom?

In 1968, I had been working on a project every day for almost a year to get the required approvals.  We had invested over $125,000, which at the time was a lot!  I was so frustrated that I went to my partner, Leroy Merritt, and told him I was done with the project and was giving up!  Leroy then gave me the best piece of advice I ever received.  He told me “I can’t is not an option.  When posed with a challenge, determine the result you want to achieve and make it happen!

The Icon Honors awards recognize business leaders around Maryland who are over the age of 60. The award salutes them for their notable success and demonstration of strong leadership. The honorees also have moved their businesses and the state of Maryland forward by growing jobs and community involvement.

Honorees are selected for their long-standing commitment to business in Maryland and significant professional accomplishments through innovation and leadership. They are also champions of their industries and have demonstrated a sustained commitment to community service. They can be in the workforce or retired and must hold or have held senior management-level positions with decision-making authority for their organization.