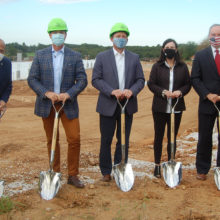 Celebree School owns and manages more than 40 locations throughout Maryland, Delaware, Virginia and Pennsylvania. “Among our core principles is to immerse ourselves deeply into the communities where we operate to makes lives better for our families and neighbors, and we know this resonates with our newest franchise owner,” explained Richard Huffman, President and CEO of Celebree School. “The fact that Britt’s family is a significant part of this event demonstrates how much he values family and their involvement in his activities.”

Celebree School offers curriculum programs aligned with the Maryland State Department of Education’s focus on Early Childhood Education and incorporates STEAM (science, technology, engineering, arts and mathematics) into every daily lesson. Infant child care programs are suitable for children ranging from six weeks to eighteen months of age and are designed for personal, social, language and physical development. All locations, which also offer summer camp programs, are locally-owned and staffed by degreed teachers.

“Owings Mills is among the fastest growing sections of Baltimore County and Celebree School is destined to play a significant role in this region,” stated Councilman Jones. “Quality daycare is a critical element that allows each of us to perform our important functions throughout the day, including running the economy. Celebree School provides the nurturing, the caring and the security that provides peace of mind to local families and enable to focus on our work.”

2 Crossing Way is a single-story building consisting of 34,200 square feet of flex/R&D space that is currently under construction and expected to be completed early next year. It is contained within Dolfield Business Park, a 44-acre business community located near Red Run Boulevard that will support nearly 380,000 square feet of commercial office and flex/R&D space when completed.

Franchise owner Britt McKenzie entered the education space for a franchise opportunity after starting a family and recognizing the importance of a solid education for his two daughters.

“Owings Mills has everything we need to be successful and we look forward to building relationships with local families and the local community,” McKenzie said. “We lived here for several years and fell in love with the diverse neighborhoods, recreational opportunities and high quality of life and this remains a tremendous place to raise a family. The area continues to expand with new residential communities and it is supported by an outstanding transportation network including a proposed new exit off Interstate 795.”

“Celebree School is a well-known and highly-regarded brand and we value this use at Dolfield Business Park which will engage many members of and provide important services to the local community,” stated Sean Doordan, Senior Vice President, Leasing and Acquisitions of St. John Properties. “We are extremely impressed with the background and entrepreneurial skills of the franchise owner and confident that his team will bring long-term value to families in Owings Mills and Reisterstown.”