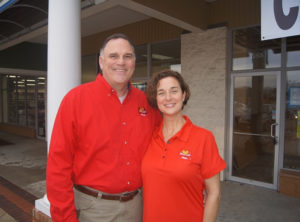 Brian and Beth Bogard, both with extensive food service and hospitality experience, plan to open up to six new franchise locations in Anne Arundel and Howard Counties with first planned for February

BALTIMORE, MD (March 30, 2017) – Brian Bogard, a former officer in the United States Army who served as Company Commander of the Food Service training center at Ft. Jackson, South Carolina, together with his wife Beth, the past owner of a local catering company, have selected Lakeshore Plaza in Pasadena as the site of the inaugural Marco’s Pizza in Maryland.

The couple, with franchise rights to Central Maryland, plan to open six locations throughout Anne Arundel and Howard County within the next several years, with the first opening scheduled for mid-February. The 161,000-square foot center, located near the intersection of MD Route 100 and Magothy Beach Road, is owned and managed by St. John Properties.

The Bogards’ first experienced the Marco’s Pizza brand while visiting relatives in Huntington, West Virginia when they ordered carry-out for the family’s weekly Friday night family meal. It was love at first bite but, given the name of the restaurant, which appeared to be derived from the school mascot of nearby Marshall University – Marco the Buffalo – the couple assumed it was locally-owned and independently-operated.

“We both agreed that it was the best delivery/carry-out pizza that we had ever tasted, and were pleasantly surprised to later learn that franchise opportunities were available in Maryland. It was important for us to open our flagship location at Lakeshore Plaza because we both work and live in the community. In addition, the demographics surrounding the center, consisting of a mix of families and an expanding day-time population, supports the profile for this fast-causal and delivery concept.”

Headquartered in Toledo, Ohio, Marco’s Pizza is considered the fastest-growing pizza company in the United States, based on the number of new stores in development since 2007, and intends to have 1,000 locations open this year. Nearly 15 signature pizza varieties are available including White Cheezy, Chicken Club, Steak & Cheese and Hawaiian Chicken. The menu also features submarine sandwiches such as the Chicken Club, Italian Sub and Pizza Club; as well as chicken wings, CheezyBread, assorted salads and desserts.

“In our opinion, all pizza is great,” Brian Bogard explained, “but some is just better than others. What we found specifically differentiates Marco’s Pizza from the competition is the flavorful dough, made daily, that is used. The typical dough used in most franchise and independent pizza restaurants basically serves as the foundation for the sauce, cheese and different toppings, without contribution to the taste of the product. This dough actually adds to the flavor profile and enjoyment of each slice. The cheese blend is comprised of three different varieties of cheese and is never frozen. The sauce consists of the perfect blend of tangy tomatoes and spices and is the original recipe from 1978. It was created by our founder, Pat Giammarco, who was seeking to replicate the recipe that he remembered while growing up in Italy.”

“From our due diligence activities, we learned that less than five percent of all Marco’s Pizza franchises close or change hands,” he added. “While every business and restaurant represents some sort of risk, we like our chances for success with this group. My wife and I carefully interviewed other franchise owners and we began to appreciate the overall culture of the company and the manner in which the headquarter executives and Marcos corporate teams train and support each franchise owner.”

Lakeshore Plaza services communities situated in the eastern sections of Anne Arundel County, including Pasadena and Arnold. More than 112,000 residents are contained within a five-mile radius of the retail center, with an average household income exceeding $96,000. Anchored by Safeway, the shopping center includes nearly 30 complementary tenants including Ace Hardware and Two Rivers Steak and Fish House.

“There exists a significant opportunity for quality pizza restaurants that offer delivery services in the Pasadena, Gibson Island and Fort Smallwood peninsulas, and we have the highest degree in confidence in the Bogards to manage a well-run and professional operation,” explained Bill Holzman, Vice President – Retail Leasing for St. John Properties. “Both have outstanding pedigrees and experience in the food service industry, combined with a strong work ethic and passion in what they do. Marco’s Pizza represents an excellent addition to our merchant mix and will provide value to the center and the surrounding community.”