16-lane bowling alley, laser tag arena,interactive escape room, and restaurant/sports bar are among the attractions included in concept that will employ more than 70 workers 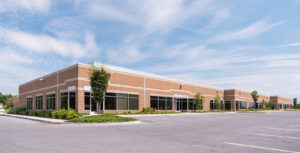 FREDERICK, MD (November 15, 2019) – Fourth Dimension Fun Center, a multi-functional Family Entertainment Center that will also include a restaurant and sports bar, is opening next summer in a new 37,560 square foot space at Arcadia Business Park in Frederick, Maryland. With an investment of more than $7 million to outfit the space with multiple attractions including a 16-lane bowling alley and state-of-the-art laser tag arena, the concept will be housed within 4725 Arcadia Drive at the intersection of MD Route 85 (Buckeystown Pike) and Arcadia Drive. Arcadia Business Park is a 61-acre business community that is being developed by St. John Properties, Inc. More than 70 full and part-time workers are expected to be employed at the venue.

“This facility to intended to satisfy a pressing need within the greater Frederick region and provide a family-friendly and interactive environment for both adults and children,” explained Brian Holzberger, who represents the Fourth Dimension Fun Center ownership group. “There are several bowling alleys in the area but, if the general public doesn’t choose to join a league, it is difficult to take advantage of the venue. This concept also emphasizes the importance for families to enjoy recreational activities together in a bonding experience. As kids get older and start playing team or individual sports, parents often find themselves on the sidelines as spectators. Each activity in this Fun Center is designed for families to participate and interact with every age group.”

The bowling alley will feature state-of-the-art pinsetting equipment that virtually eliminates delays caused by mechanical malfunctions, and is surrounded by four 289” television screens that will air live sporting events. The adjacent restaurant will specialize in stone fire pizza, chef-crafted burgers, an assortment of sandwiches, salads and appetizers, as well 24 beers and eight wine selections on tap.

The laser tag arena will utilize two types of blasters and feature 20 different game modes ranging from “Capture the Flag” to “Zombie Mode.” Two interactive escape rooms address the growing trend in the real estate game genre that challenge players to gather clues, solve riddles and figure out puzzles in a confined space before time expires. This concept has also proven popular among businesses for employee bonding experiences.

The 6,000 square foot arcade will include crane games, skee ball and photo booths, as well as the XD Dark Ride which is configured as a 3D interactive experience equipped with full motion seats that immerse riders in a movie of their choice to compete for points. Lazer Frenzy brings the lazer maze from the movie Mission Impossible to life with games that include Spy, Team Spy, Beam Dodger and Beam Breaker.

Fourth Dimension Fun Center will offer birthday party packages ranging from bowling for one hour to a large group interacting with the full complement of attractions in the area.

“Our ownership group has a built a strong relationship with St. John Properties in the Frederick area, and the company understands our business plan and is extremely supportive of this new venture,” Holzberger added. “The building provides us with a high-quality appearance and large open space that allows us the necessary flexibility to execute our concept as well as the availabity of abundant free parking.”

“We believe this concept is highly-creative and sorely needed in Frederick, and we have tremendous confidence in the entreprenuers behind this endeavor,” stated Matt Holbrook, Regional Partner for St. John Properties. “Fourth Dimension Fun Center’s use is symbiotic with the other activity in the park because the majority of its activity will occur during the evenings and weekends when most businesses within Arcadia Business Park are closed, so daytime traffic will not impacted,”

St. John Properties, Inc., founded in 1971, owns and has developed more than 20 million square feet of R&D/Flex, Office, Retail and Warehouse space in Maryland, Colorado, Louisiana, Nevada, Pennsylvania, Virginia, Utah and Wisconsin. The company was named “2018 Developer of the Year” for the Nation by NAIOP, the Commercial Real Estate Development Association.  For more information about the company, visit www.sjpi.com.