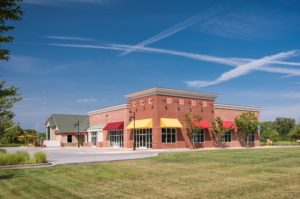 BALTIMORE, MD (September 6, 2017) – Michael’s Café, a thirty-three year old family business that has operated a single location on York Road in Timonium since 1984, has signed a lease with St. John Properties, Inc. for 6,024 square feet of space within Greenleigh at Crossroads, the next development phase of Baltimore Crossroads. The 1,000-acre mixed-use business is situated in the White Marsh area of Baltimore County. Michael’s Café will establish its second restaurant at 720 Concourse Circle, a standalone retail building adjacent to various restaurants and consumer service tenants. Bill Holzman, Vice President, Retail Leasing at St. John Properties represented the landlord in this transaction.

Founded by Michael Dellis, Michael’s Café is recognized for its contemporary American menu with an emphasis on homemade crab cakes made from a secret family recipe, steaks, soups, salads and sandwiches. The York Road location includes an indoor lounge, outdoor patio, bar and conference room. According to Lauren McGee, one of the owners of the restaurant, the food offerings at Greenleigh at Crossroads will represent “a compact version of the original menu, with a few specialty dishes.”

“For at least the past five years, we have been actively searching for the perfect expansion location that is far enough away from our York Road restaurant, while also offering consistently strong traffic counts to support our concept,” explained McGee. “Greenleigh at Crossroads was the first location to satisfy every important requirement, particularly the rapid growth and expansion that is quickly occurring at the mixed-use community. The size of the space was also extremely important. We wanted our second location to be somewhat smaller than our current restaurant, because we believe this will be more manageable. The existing retail tenants at Greenleigh are performing extremely well and, as new residents move into the newly-built residential section, we expect traffic to significantly increase.”

Located along MD Route 43 (White Marsh Blvd.) near Interstate 95, Baltimore Crossroads is configured to support more than 2.5 million square feet of commercial office, flex/R&D, warehouse, industrial and retail space, in addition to the hotel and residential components. Approximately 2,500 employees currently live and work in the community, including multi-family residents at the Arbors at Baltimore Crossroads and more than 10,000 jobs are expected to be created upon the completion of Baltimore Crossroads.

“Michael’s Café adds an important sit-down restaurant component to the retail mix at Greenleigh at Crossroads, which will be particularly conducive to local businesspeople,” explained Bill Holzman, Vice President, Retail Leasing for St. John Properties. “It is also recognized for its family atmosphere, and will fill an important niche for consumers residing within the community, as well as the greater White Marsh area. Michael’s Café represents an extremely strong restaurant brand with a loyal following, operated by a proven ownership group. Residents that have moved northward from the Towson and Timonium area will gravitate to this new location.”