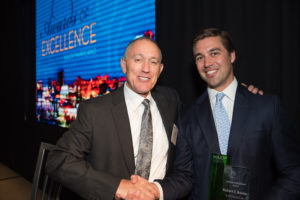 Becker, who celebrated his 40th anniversary working with St. John Properties last year, began his commercial real estate career with the company as a driver for founder and current chairman Edward St. John, while still attending Loyola College in 1975. His responsibilities quickly expanded to oversee the grounds maintenance and property management departments and, later, to leasing where he rose to the position of Senior Vice President. St. John Properties, which owned and managed approximately three million square feet of space when he started with the firm, is now considered among the largest privately-held commercial real estate organizations locally with more than 17 million square feet of space in eight states.

Becker becomes the second St. John Properties executive to win this award, which is presented every other year by NAIOP Maryland to honor significant accomplishments and contributions to the Maryland marketplace over an extended career. Edward St. John was honored with the award in 2000 and Scott Dorsey of Merritt Properties was the immediate past recipient in 2014. Additional past winners include Randall Griffin and Dwight Taylor of Corporate Office Properties Trust; David Bavar of Bavar Properties Group; Harold and Bernard Manekin of Manekin, LLC; Leroy Merritt of Merritt Properties and Clay Emory of Emory Hill Companies.

“I was caught off guard and completely surprised when informed of NAIOP Maryland’s intent to recognize me in this manner, and I initially asked for time to consider my acceptance,” Becker explained. “I associate this award with the legends and true groundbreakers of the industry and was humbled to be selected for this wonderful honor. It is my philosophy to perform my job each day to the best of my ability, and function as part of a collective team. It is extremely gratifying to be placed in the company of past winners.”

“Bob is widely respected for his extreme professionalism in the commercial real estate industry, and he has remained an active volunteer for numerous NAIOP Maryland and community-oriented projects throughout his career,” stated Brendan Gill, President of NAIOP Maryland. “His humble attitude, strong work ethic and knowledge of the industry are among the traits that make him an important role model for our membership.”