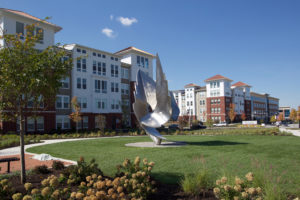 BALTIMORE, MD (September 25, 2019) – St. John Properties, Inc. and Somerset Construction Company will dedicate an original sculpture to the Greenleigh at Crossroads community, along with a special plaque honoring Kevin Kamenetz, who served as Baltimore County Executive from 2010 until his untimely passing in 2018. Entitled Turning Winds, the sculpture was created by Maryland artist Will Hemsley and is positioned adjacent to The Berkleigh, a multifamily development on Greenleigh Avenue. St. John Properties, together with Somerset Construction Company and Elm Street Development, are currently developing Greenleigh at Crossroads, located in the Middle River area of Baltimore County. The 1,000-acre mixed-use community represents the next development phase of Baltimore Crossroads.

The 20-foot-tall brushed metal sculpture consists of two intertwined leafs that evoke feelings of vibrancy, energy and freedom as they seemingly sway in concert as directed by the prevailing winds present in the community.

Edward St. John, Founder and Chairman of St. John Properties, credits the success of the development in part to Kamenetz’s vison. “During a meeting with Kevin in 2012 about the future direction of Baltimore Crossroads, he challenged us to return to the drawing board and configure a new section that reflected the most creative and forward-looking thinking for mixed-use communities. The development should serve as a model for all future live-work-play environments in the State of Maryland,” explained St. John. “This new direction became the inspiration for Greenleigh at Crossroads which was designed to serve the evolving needs of local companies and residents. None of this would have been possible without Kevin’s urging, vision, support, and leadership.”

The concept plan for Greenleigh at Crossroads consists of 2,000 residential units including single-family homes, townhomes and multi-family units; nearly four million square feet of commercial space and retail amenities; and a 120-room SpringHill Suites by Marriott. More than 6,000 people are currently employed within the development, a number that is expected to rise to 9,000 at final build-out. The total tax value upon completion of the project is projected to be just under $2 billion, with an estimated $15 million in real estate taxes paid annually.