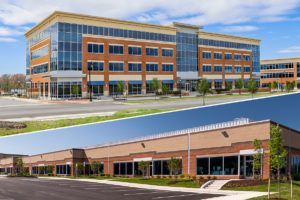 Renderings of buildings at Simms Technology Park in Broomfield, Colorado

DENVER, CO  (July 20, 2020) – St. John Properties, Inc. has acquired 81 acres of land in Broomfield, Colorado with plans to develop Simms Technology Park, a mixed-use business community containing nearly 600,000 square feet of single-story, multi-story and flex/R&D space, in addition to complementary retail amenities and available pad sites. Headquartered in Baltimore, Maryland, the full-service commercial real estate development and investment company owns and has developed more than one million square feet of space in Colorado since 1987 and intends to invest $95 million in this project situated approximately 20 miles northwest of the Denver metropolitan area. Construction activities for phase one of Simms Technology Park are expected to commence in early 2021.

“This strategically-positioned site provides the opportunity to execute our long-term development strategy in a section of Colorado that contains every essential metric for sustained growth and economic vitality,” explained Brandon Jenkins, St. John Properties’ Regional Partner for Colorado. “The philosophy of St. John Properties is to remain ahead of the development curve and speculatively build commercial real estate product that anticipates the future needs of our clients. We were attracted to the site’s proximity to the existing business communities of Interlocken and Westmoor Technology Park as well as easy access to Boulder and Denver markets along the  U.S. – 36 northwest “creative corridor” of the Denver metropolitan area. Our research shows the continuing trend among users of commercial office space in all product categories to migrate to Denver’s northwest suburbs for expansion and relocation.”

According to data from the Broomfield Economic Vitality Division, Broomfield County is the third-fastest growing county in Colorado with a population that has nearly doubled over the past 20 years Approximately two-thirds of new residents have relocated from within the state. The median age of all residents is 37.6 with a median household income approaching $109,000. Major employers include CenturyLink, Oracle America, SCL Health Care, Ball Corporation and Vail Resorts. A number of companies engaged in high technology and research and development have relocated to the region in recent years.

Nearly 5.5 million people reside in Colorado, including nearly two million households, with a median age of 36.5 and more than 37.5% of the state population has earned a bachelor’s degree or higher. Statewide population has grown by nearly 730,000 people (14.5%) over the past decade which represents the fourth largest by percentage according to the United States Census Bureau.

St. John Properties, Inc., founded in 1971, owns and has developed more than 20 million square feet of R&D/Flex, Office, Retail and Warehouse space in Maryland, Colorado, Louisiana, Nevada, Pennsylvania, Virginia, Utah, and Wisconsin. The company was named “2018 Developer of the Year” for the Nation by NAIOP, the Commercial Real Estate Development Association.  For more information about the company, visit www.sjpi.com/colorado.