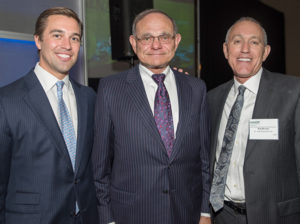 BALTIMORE (April 29, 2016) – St. John Properties, Inc., a Baltimore-based real estate development and management company, captured five honors in the NAIOP Maryland “Awards of Excellence” competition, tying for the most amount of awards won by a single company in the biennial program. Celebrating the innovative achievements of regional commercial real estate developers and associated industry vendors, twenty-nine separate award categories were recognized at this year’s event. The company, which owns and has developed more than 17 million square feet of real estate space throughout eight states, was honored with:

• The “Lifetime Achievement Award” for Robert C. Becker, Senior Vice President of St. John Properties who was recognized with this honor. Becker becomes the second St. John Properties executive to receive this award, which is presented to honor significant accomplishments and contributions to the Maryland marketplace over an extended career. Edward St. John, Founder and Chairman of the company, received the award in 2000.

• Best social impact for the “Fallen Star” Memorial at The Government and Technology Enterprise (The GATE) at Aberdeen Proving Ground. This memorial was installed and dedicated last year inside Aberdeen Proving Ground in honor of Major General Harold (Harry) J. Greene, as well as all United States warfighters who gave their lives in service to the nation, and their families. Major General Greene was killed in action in Afghanistan on August 5, 2014 during Operation Enduring Freedom-Afghanistan while serving as the Deputy Commander of Combined Security Transition Command-Afghanistan. He was the first general officer killed in a combat zone since the Vietnam War.

• Most creative transaction for The GATE at Aberdeen Proving Ground. St. John Properties completed permanent financing totaling $93.4 million which included both conduit and bank lenders, while overcoming obstacles created by The GATE’s presence inside a secured installation, educating lenders about the nuances of an Enhanced Use Lease (EUL) and financing a project on federal land.

“We are extremely proud of each award, but are especially gratified by the honoring of Bob Becker, who has contributed significantly to the success of our company over his forty one year career,” stated Larry Maykrantz, President of St. John Properties. “All of these honors reflect the work ethic and passion for our clients that our team demonstrates every day.”