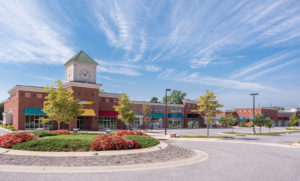 BALTIMORE, MD (April 2, 2019) – JDL, LLC, which holds franchise rights for Steak ‘n Shake restaurants throughout Anne Arundel, Baltimore, Harford and sections of Howard County, has signed a lease with St. John Properties, Inc. for approximately 2,100 square feet of space within Greenleigh at Crossroads, a 550-acre mixed-use community situated in the White Marsh area of Baltimore County. When the national chain opens this summer at 750 Concourse Circle, it will mark the first Baltimore County location for the counter-service restaurant recognized for its steakburgers and milkshakes. Bill Holzman, Vice President, Retail Leasing for St. John Properties represented the landlord and Sean Langford and Tom Mottley of The MacKenzie Companies represented the tenant in this transaction.

JDL, LLC plans to open two new Steak ‘n Shake restaurants per year in the Baltimore metropolitan region, adding to the Greenleigh at Crossroads location and the site located on Veterans Highway in the Millersville section of Anne Arundel County. Founded in Iowa in the mid 1930s, Steak ‘n Shake features its classic Steakburger, together with the Prime, which is constructed of a blend of brisket and chuck beef, in addition to specialty sandwiches which include Portobello mushrooms, western barbeque or Cajun sauce among others. Hand-dipped ice cream is utilized to create the milkshakes with more than twenty varieties available including Reese’s peanut butter cup, Oreo cookies and cream and Nestle Butterfingers. Steak ‘n Shake began as a sit-down restaurant but added a counter-service style in 2010 as well as a drive-through window, which will be included in the end-cap space at 750 Concourse Circle. More than 600 locations are currently open globally.

“After touring numerous potential sites throughout the Baltimore County region, as well as completing extensive research and due diligence activities, we concluded that Greenleigh at Crossroads offered the highest chance of prolonged success based on the tremendous growth expected to occur at the mixed-use development,” explained Dominic Rose, Operations Partner and Franchisee for JDL, LLC. “The community has expanded exponentially over the past five years and new commercial office space and residential housing will continue to be added in the foreseeable future. We were also attracted by the hotel element, which will bring new consumers to the site on a daily basis.”

“Steak ‘n Shake is an iconic franchise concept with an extremely loyal customer following which generates a tremendous amount of enthusiasm when entering a new market,” stated Bill Holzman, Vice President, Retail Leasing for St. John Properties. “They are considered a high value meal, and the counter-service style of ordering significantly reduces the amount of time needed to dine, which will be extremely attractive to employees working in the surrounding buildings. Steak ‘n Shake brings signature food and beverage items to our restaurant mix and the restaurant menu appeals to consumers throughout all times of the day, including late at night.”

St. John Properties, together with Somerset Construction Company and Elm Street Development, are currently developing Greenleigh at Crossroads, which represents the next development phase of Baltimore Crossroads, a 1,000-acre mixed-use community. The concept plans consist of 1,900 residential units including single-family homes, townhomes and multi-family units; more than 1.76 million square feet of commercial space and retail amenities; and a 120-room SpringHill Suites by Marriott. Upon final completion, Baltimore Crossroads is configured to support more than 2.5 million square feet of space.

St. John Properties, Inc., founded in 1971, owns and has developed more than 19 million square feet of Flex/R&D, Office, Retail and Warehouse space in Maryland, Colorado, Louisiana, Nevada, Pennsylvania, Virginia, Utah and Wisconsin. The company was named “2018 Developer of the Year” for the Nation by NAIOP, the Commercial Real Estate Development Association.  For more information about the company, visit www.sjpi.com.